Pain in the perianal area is the most common symptom of an anorectal abscess. The pain may be dull, aching, or throbbing. It is worst when the person sits down and right before a bowel movement. After the individual has a bowel movement, the pain usually lessens. Other signs and symptoms of anorectal abscess include constipation, drainage from the rectum, fever and chills, or a palpable mass near the anus.

The condition invariably becomes extremely painful, and usually worsens over the course of just a few days. The pain may be limited and sporadic at first, but invariably worsens to a constant pain which can become very severe when body position is changed (e.g., when standing up, rolling over, and so forth). Depending upon the exact location of the abscess, there can also be excruciating pain during bowel movements, though this is not always the case. This condition may occur in isolation, but is frequently indicative of another underlying disorder, such as Crohn's 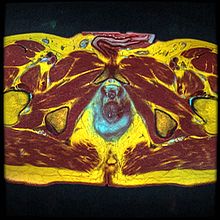 A physician can rule out a hemorrhoid with a simple visual inspection, and usually appreciate an abscess by touch.

Generally speaking, a fairly small but deep incision is performed close to the root of the abscess. The surgeon will allow the abscess to drain its exudate and attempt to discover any other related lesions in the area. This is one of the most basic types of surgery, and is usually performed in less than thirty minutes by the anal surgical team. Generally, a portion of the exudate is sent for microbiological analysis to determine the type of infecting bacteria. The incision is not closed (stitched), as the damaged tissues must heal from the inside toward the skin over a period of time.

The affected individual is often sent home within twenty-four hours of the surgery, and may be instructed to perform several "sitz baths" per day, whereby a small basin (which usually fits over a toilet) is filled with warm water (and possibly, salts) and the affected area is soaked for a period of time. Another method of recovery involves the use of surgical packing, which is initially inserted by the surgical team, with redressing generally performed by hospital staff or a District Nurse (however, following the results of several double-blind studies, the effectiveness of surgical packing has come into question). During the week following the surgery, many patients will have some form of antibiotic therapy, along with some form of pain management therapy, consistent with the nature of the abscess.

The patient usually experiences an almost complete relief of the severe pain associated to his/her abscess upon waking from anesthesia; the pain associated with the opening and draining incision during the post-operative period is often mild in comparison.