Hemorrhoids are swollen veins in the lowest part of your rectum and anus. Sometimes the walls of these blood vessels stretch so thin that the veins bulge and get irritated, especially when you poop. 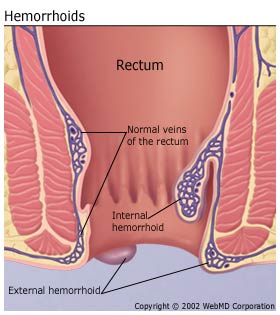 Hemorrhoids are one of the most common causes of rectal bleeding. They're rarely dangerous and usually clear up in a couple of weeks. But you should see your doctor to make sure it's not a more serious condition. He can also remove hemorrhoids that won't go away or are very painful.

Internal hemorrhoids are far enough inside the rectum that you can't usually see or feel them. They don't generally hurt because you have few pain-sensing nerves there. Bleeding may be the only sign of them.

External hemorrhoids are under the skin around the anus, where there are many more pain-sensing nerves, so they tend to hurt as well as bleed.

Prolapsed hemorrhoids usually go back inside on their own. Even if they don't, they can often be gently pushed back into place.

A blood clot can form in an external hemorrhoid, turning it purple or blue. This is called a thrombosis. It can hurt and itch a lot and could bleed. When the clot dissolves, you may still have a bit of skin left over, which could get irritated.

Some people may be more likely to get hemorrhoids if other family members, like their parents, had them.

A buildup of pressure in your lower rectum can affect blood flow and make the veins there swell. That may happen from extra weight, when you're obese or pregnant. Or it could come from:

People who stand or sit for long stretches of time are at greater risk, too.

You may get them when you have constipation or diarrhea that doesn't clear up. Coughing, sneezing, and vomiting could make them worse.

How to Prevent Them

Eat fiber. A good way to get it is from plant foods -- vegetables, fruits, whole grains, nuts, seeds, beans, and legumes.

Drink water. It will help you avoid hard stools and constipation, so you strain less during bowel movements. Fruits and vegetables, which have fiber, also have water in them.

Exercise. Physical activity, like walking a half-hour every day, is another way to keep your blood and your bowels moving.

Don't wait to go. Use the toilet as soon as you feel the urge.